So far, so good

Some months ago, we foresaw that there would be difficulties in getting ourselves extricated from jobs, etc, and planned out in some detail just how we would go about it. I am pleased to say that so far, excepting delays, everything (absolutely everything) we have planned has worked out in our favour, and now that it's been successful, I'm happy to reveal a few juicy bits of ... um, common sense. Well, not really juicy.

Living in Asia is about learning how to manage people, and the most important aspect of managing people in Asia is learning to manage face. The Korean word is 'kibun', in maori it's 'mana', in Cory Doctorow's world it's 'whuffie'. Kibun, but most curiously use of our own, rather than the massaging of someone else's, has been the key to our success in this particular obstacle course. Throughout the year we did any and all things which were asked of us - working overtime, working stupid hours, doing a camp between Christmas and New Year, unpaid work and all such stuff which goes along with being an ESL teacher. This laid a groundwork of good faith. Good faith goes a long way here; but while it trumps a certain amount of malice and general obstinance, it unfortunately does not trump plain dumb incompetence, which exists in boatloads everywhere, but seemingly in armada-loads in Asia. I could rant here about the failings of kibunocracies as opposed to meritocracies, but 100,000,000 other arrogant honkies have ranted about that already and it's old hat. What does trump incompetence is the quality which I refer to as Not Being Completely Fucking Useless, which more polite people probably call competence. In a kibunocracy, competence isn't enough to get you what you need; you need kibun to back your competence. Without kibun, no matter how right you are, nobody will believe a single thing you say, or even bother to try and verify what you tell them, just on the off-chance you might be Not Completely Fucking Useless. Good faith, in this case, bought us an amount of kibun - a microscopic amount by Korean standards, but in conjunction with a certain amount of Not Completely Fucking Uselessness, it's been enough.

A side note here: I am extremely intolerant of incompetence, even in small amounts.

So Deb and I took as a given that someone, probably multiple people in multiple different positions, would fuck something up due to Being A Useless Bastard, and make our life tricky, so we came up with a plan which had multiple levels of Competence Redundancy - we figured out exactly what needed to be done, and how to do it, so that when Useless Bastards Fucked Shit Up due to Being Completely Fucking Useless, we could just tell them how it was supposed to go down and hopefully they'd manage it on the second or fifth try. This sounds arrogant, but as it happened we were absolutely right.

We knew we were owed nine working days leave, and we also knew that there would be a week or so at the very tail end of the contract when we would likely be called back to work, for the 'winter term' which is all of a week long, plus some admin and so on. We aimed, as any sane and sensible person would, to take this hard up against the end of our contract, and the key to securing this was the surprise decision that Stu and Toni would come to visit during exactly that period. As strangers to Korea, the onus was on us to provide them the best possible experience; essentially getting that time off work became a matter of preserving our kibun as hosts and friends. Under other circumstances, I suspect that we'd have been asked to make exceptions for special cases - oh, just come in for a half day; just come to this one meeting; this one class ... but under these circumstances, to ask us to work would be to insult our guests, and to insult our honourable guests would be worse than insulting us, so nary a peep did we hear from the bosses. Step one: secure the leave. Achieved.

Once leave was secured, the trick was to convince the Office of Education that we should be able to a) leave our jobs and home and korea before the end of our contract, during the time that the leave was running; and b) that we should be all paid out before same. Thinking logically about it, there is absolutely no gain to the employer by NOT granting these two particular boons, but as with any deviation from procedure, it requires a little bit more activation energy. Lacking enough direct kibun for this, we leveraged our situation as People Who Have Done Stuff For No Tangible Benefit in the past, and called on the guy for whom we'd done a fair bit of said Stuff - Mr Lee, the VP of one of the main skools, who has been friend, advisor and interpreter this whole time. Mr Lee has absolutely shitloads of kibun, and a conservative application of it by him on our behalf was sufficient to get an in-principle agreement to leave and get paid early. Step two: secure assurances permitting our timely release. Achieved.

All going fine, right? Getting tickets and visas was relatively easy, and the only real incompetence involved was our own - not turning up at the embassy on time, forgetting passports, etc. You'll be pleased to know I'm as intolerant of incompetence in myself as I am in others.

The crunch really came when we got paid. We did in fact get paid, on time, just as Mr Lee had organised, but (as always) there was a hitch. We were paid our final pay and bonuses, but not paid for the return portion of our plane tickets - ~KRW900,000 each, or about a month of good livin' in southeast asia. This was explicitly Not Acceptable, and just as we had predicted, it was the result of a someone Being Completely Fucking Useless. But we had predicted it, and were prepared for it, and consequently called Mr Lee and asked him to tell the supervisor responsible for the payment to pay the amount of the tickets, as per the receipts we'd already provided them. We needed to close out our bank accounts that day, but as it was only 0900, there was plenty of time to get it all sorted, no worries and no drama.

The catch here is that we'd burned up much of what little kibun we had by asking for the leave during a time when we could conceivably have been called in to work, and asking to leave early, and asking to be paid early. These were all pretty big requests, but they had been granted and, based upon the fact that they'd been granted, we'd made plans which couldn't be changed. So when Mr Lee called back and said that the supervisor had said that the return portion of the ticket was only paid on renewal of the contract, not at the end of it, I really had no choice but to read to him from the contract. It is really quite insulting for someone as humble as me to lecture someone as senior and kibunworthy as Mr Lee in such a way, but the fact remained that I was right.

Our supervisor simply did not know the contract very well, which is Pretty Fucking Useless, but not only that, she hadn't actually bothered to check the fucking thing before stating, as her final word on the matter, that no payment should or would be made. Even when I told them what Article and Section of the contract provided for this payment, they didn't check. This qualifies as Absolutely Rank Fucking Uselessness and if I were king, would be punishable by making the person EAT a copy of the nine-page fucking contract with hot sauce on, using only a teaspoon.

It eventually took six very strongly worded phone calls to Mr Lee, and a threat to get on a bus and go to the supervisor's office with contract in hand and the appropriate clause marked in yellow highlighter, demanding cash payment in full, before the fucking supervisor reached into her drawer and took out the contract, looked at it, and said "Oh yeah, whitey's not so stupid after all." She eventually paid us an amount about KRW35,000 less than we were owed, with no explanation as to the variance, but by this time I'd already wasted an entire day, and was happy to just have it sorted.

All's well that ends well, I suppose. I now have nil to negative kibun in that particular office - so little, in fact, that Mr Lee cancelled the farewell dinner for us. The ridiculous thing is that I was right. I was 100% correct in every detail, and yet because I was arrogant enough to stick to my guns and insist on my full entitlement, my rep is toast.

It's good to be leaving.


While staying at the Samsung Motel in Jonggak, Seoul, Stu and Toni are fortunate enough to have one of these: 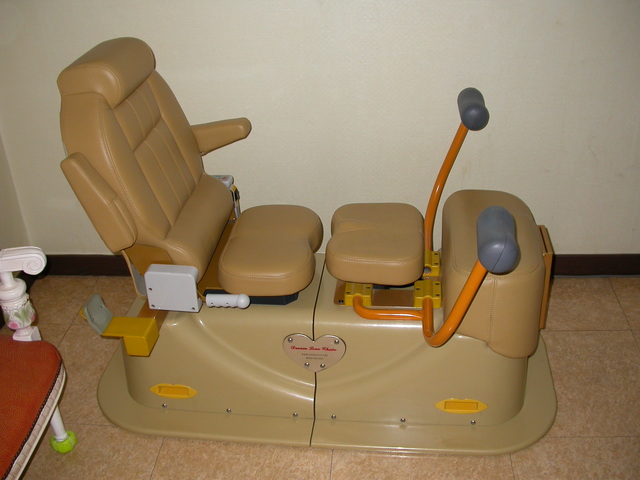 Stu calls it the FuckMaster 9000, but as you can see from the name plate: 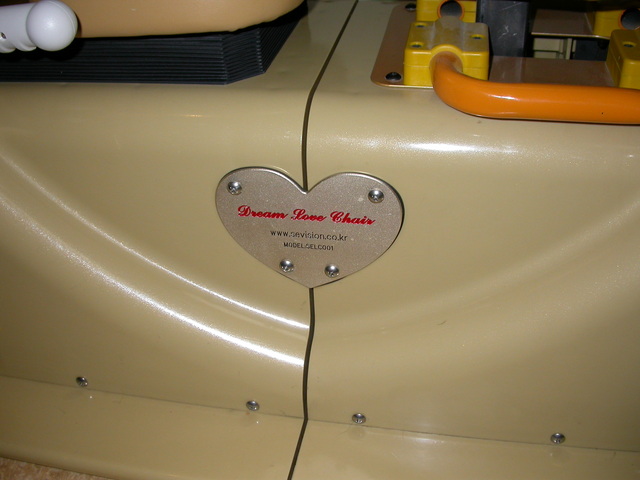 its real name is Dream Love Chair. None of us can quite figure out how it's supposed to function, but nevertheless it looks like an awful lot of hard work.

And, yes, this is one of the more perverse things we've seen in Korea.

Addendum: My good mate DirectHex was good enough to point out the instructions for Dream Love Chair.